Sorry, slightly late on this post, I’ve managed to acclimatise to the new time zone, but it means when I’m tired, I’m practically asleep, so wasn’t exactly able to write this post when I got in last night.

Today (June 6) I was given the abbreviated tour of Dartmouth by Emilia, who showed me all her favourite haunts (and got me to take photos of her at various spots too). I’ve spent some time at various universities (Imperial, Oxford and Nottingham for various reasons) and it’s quite similar to Nottingham as they’re both campus universities, but Dartmouth is HUGE. It’s connected to the town of Hanover and it basically is a town, there’s about 5,000 students and then the professors and staff etc etc. So it’s a town of 18-22 year olds in term time, and I really noticed the lack of kids, because they’re such a huge rarity. I think it’s because I’m so used to the hordes of school kids in London, not having to step around crowds of people under five foot surprises me! Hmm maybe Dartmouth would take a few of them….

In the evening there was a big family dinner (big being the operative word) with Emilia’s family and her roommate Katelyn’s family (and me). So we had thirteen people squashed into an area in a restaurant meant for ten, and two+ languages being spoken. It was lovely and noisy and generally celebratory (which is the norm for Emilia’s family). They’ve pretty much adopted me now, and they’re working on teaching me Greek and finding me a Greek husband.

Then we went to an actual American college frat house, and played Dartmouth beer pong (not the normal beer pong you know, this involves ping pong paddles and about a million rules). As expected for anything involving small bouncy balls, I was decidedly not good when we started out, but I had an extremely patient partner who was so good we ended up winning anyways! I was getting the hang of it by the end, but as I can say I am currently undefeated, I think my pong career is over. It was good fun though, might be worth bringing it back to the UK. But not the beer, because that is disgusting.

Current Location: somewhere in Boston, on the road from the airport to Hanover

So I’m blogging again because my life is suddenly interesting, namely I’m travelling. And the first stop on my Great American Adventure ’14 is Dartmouth College, New Hampshire. It is my absolute best friend in the whole world’s college graduation and I am a) ridiculously proud and b) ridiculously excited to party.

We usually get up to generally insane things when we’re with each other so there should be a good story or two. But today’s just been a travelling day, so here’s day 1 – Why Fi Is A General Idiot

1) Currency – I forgot that dollars come in $1 denominations, so I handed the cashier two 5$ bills to and was completely flummoxed when I got my $2 back as bills. I spent about twenty seconds just staring at the change….ticking it over in my head…”Ohh yeah”. Derp.

2) Communication – I did live in America, I have American friends, I went a school with Americans, so I know things like “restroom”. So I asked someone at the airport “Where do I get DaRRtmouth coach?”
*bemused face* “Where?”
“DaRtmouth? DaRtmouth college, Hanover??”
“Ohh, DaHHtmouth.”
Gahhh.
I think either I’m going to have to try and fake an American accent to make people laugh (trust me, it’s bad. Like, really bad) or go really posh and proper British as a novelty factor.

3) Courtesy – people keep telling me to have a nice day and I keep saying sorry to them when it’s not my fault. It’s confusing everybody.

I’m eating a PB&J sandwich and drinking Minute Maid lemonade (it is my crack, seriously) so I think I’m blending in a bit better…as long as I keep my mouth shut.

So about seven minutes then!

In Which I Start Blogging Again

Hi world at large, or those who’ve somehow stumbled onto this accidentally. No this is not a blog that will tell you how to lose those extra Christmas kilos, sorry. If you want something like that, please click on one of the many ads on Facebook telling you how to “Get a Flatter Stomach in 2 Weeks”. Or is it just me getting those? Awkward…

Anyways, if you’ve read my blog before (/know me in any capacity) you won’t be surprised that the format of this blog is going to be a lot of me rambling on about whatever pops into my head.  If you haven’t, it’ll involve baking, my slightly-mad life as a medical student, the city that I love (London), and anything I damn well please.

10 Things That Surprised Me In 2013 (in roughly chronological order)

1)      I found a sport that I actually ENJOY doing. Yes, surprising indeed, until you realise that this “sport” is actually a thinly veiled excuse to beat people up and do action movie rolls. No it’s not the Russian Assassin Training Academy, it’s Krav Maga, a martial art/self defence form designed by a streetfighter for the Israeli army. I love it because it’s nasty, clever, vicious, and very very fun.

2)      I am really lucky with my friends in medical school. I’ve had some good friends all through uni, but this  year I either made new friends or became closer to some of my others, which has honestly been really great, because they’ve been the ones keeping me (vaguely) sane this year. From my housemate (we bonded over Atonement and treacle tart in late January) to my brilliantly insane/insanely brilliant firms partners to the overwhelming common sense of the costumes girls to the gap year friends to my best friend who I lived with for eight weeks this summer, thanks guys. Expect more baked goods in 2014.

Really glad I found this photo, you can tell it’s from the beginning of Circle Line as we’re all still sober…the later photos aren’t as pretty

3)      I went on a date with someone who is clumsier than I am, which is a major accomplishment. On my second date with them, in a little Italian restaurant, he gestured and sent a whole glass of red wine scattering into little pieces on the floor, and was absolutely mortified while I was stifling laughter. Clearly I liked something about him, because we’ve been dating eight months… 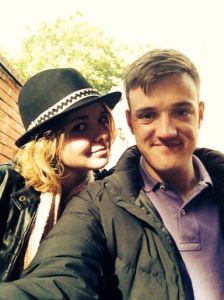 4)      No matter how strong-willed you think you are, or stubborn or unwilling to admit weakness, when your health suffers, sometimes you have to admit you’re not okay and need some help. I had some mental health problems May through July, and I can really advise against them, because that sucked. And I like to think I’m pretty good at pushing through problems and working through them by myself, but I really needed all the amazing support I had then, because I wouldn’t have coped without it (I barely coped with it).

5)      It is entirely possible to make six ABBA costumes in about five hours, complete with flares, batwings and fabric so shiny even David Bowie wouldn’t touch it. And they can look seriously good, a brilliant example of teamwork from the costumes team (yes I helped make them, how did you guess?) 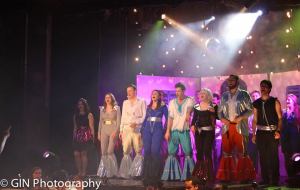 Possibly one of the proudest moments of my life, embarrassing as that is

6)      I passed 2nd year of medicine. Honestly I didn’t think I would, in part because of me being ill, and partly due to how stressed and terrified I was around our May exams. I got the results in a Spanish lesson during my summer internship and had to leave the room to check my results, then I was so relieved I started to cry so much that I worried my Spanish teacher.

7)      I saw some unbelievable, jaw-dropping sights. From one of the seven new wonders of the world (the Iguazu waterfalls between Argentina and Brazil) to whales barely three metres away to the Andes mountains, sights that look like they should’ve been in photos or books, right in front of me! As my best friend said, “I spent SO MUCH money this summer, and I wouldn’t take back a single minute of it”. Agreed.

The Andes. which we sledded down. On plastic kiddy sledges. As you do

8)      I really like clinical medicine, and it’s exactly what I want to do. Which is probably a good thing seeing as I’m partway through a medical degree. But at the end of second year I was a bit burnt out and uninterested after two years of lectures and academics, so being able to talk to REAL LIVE PEOPLE and find out what’s wrong with them was a revelation.

9)      Apparently I can drive well enough to pass a driving test. Terrifying prospect as it is to the majority of the UK population, but true. I actually passed on my first try…two years to the day that I put a car through a brick wall.

10)   Looking back on it, this year’s been marked out by music. From the London jazz clubs, to the soul radio shows I assisted on, to being woken up by Aretha when I was sick, to learning to dance salsa/Argentine tango, to the Insanity workout mix, to the radio in my car, this year’s soundtrack was brilliant, eclectic, and LOUD. And to put a final cherry on top, this week I rediscovered a mad, totally unique band I first heard in a street party on my gap year, and that’s been sampled in one of the top songs of 2013 (Balkan Beat Box, they’re the Middle Eastern beat in Talk Dirty by Jason Derulo, have a listen).